Breaking News
Home / Top Story / Prince Philip Spent His Life with Land Rovers, and This One Will Carry Him to His Funeral

Prince Philip Spent His Life with Land Rovers, and This One Will Carry Him to His Funeral


UPDATE 4/15/2021: The British Royal Family released these images today (above and below) of the Land Rover Defender 130 in which Prince Philip will be carried to funeral services. It is a modified Defender TD5 130 chassis-cab truck made at Land Rover’s Solihull, England, factory in 2003 based on modifications requested personally by the late Duke of Edinburgh. There are special stops to hold his coffin in place in the back.


Anyone married to the reigning monarch of an important country is likely to be in a position to drive pretty much anything that takes their fancy. But Prince Philip, a.k.a. the Duke of Edinburgh, the long-serving consort to Britain’s Queen Elizabeth II, was a Land Rover loyalist for most of his long life. He died late last week at the age of 99 and, appropriately, he is set to take his final ride in a modified Defender that he helped to design himself.


Land Rover’s relationship with the British royal family goes back almost to the company’s origins. The 100th vehicle built was presented to King George VI, the Queen’s father. But Land Rover was still a single-model offshoot of the larger Rover car company when Elizabeth became queen in 1952, and Philip’s initial choice of wheels as her consort was more skewed towards traditional British sports cars, including such obscure gems as a 1954 Lagonda 3.0-liter drophead coupe and a 1961 Alvis TD21 Series II convertible. But by the 1970s—and the launch of the Range Rover—the Duke’s long-term relationship with posher Land Rover products got underway. He seems to have owned, leased, or at least driven one of every generation of Range Rover.


In 2016 the Duke surprised Barack and Michele Obama when he jumped into the driver’s seat of a then-new L406 fourth-generation Range Rover to act as chauffeur for both them and the Queen during an engagement at Windsor Castle. An earlier L322 third-generation model still lives at the royal family’s Balmoral estate in Scotland, having acquired 81,000 miles over 11 years, according to the UK’s MOT vehicle inspection records, and having been regularly driven by both the Queen and Prince Philip.

The Duke of Edinburgh’s driving career effectively ended after a crash in a Freelander near another royal estate, Sandringham, in February 2019. The then 97-year-old prince collided heavily with a Kia Picanto supermini after reportedly pulling out of an intersection while blinded by low sunshine; the Freelander ended up on its side. Nobody was seriously injured in the crash, and Philip immediately ordered a replacement Land Rover, which was delivered the next day. Some tense behind-the-scenes discussions with courtiers seem to have followed, which led to the prince’s voluntarily surrendering his driving license the following month.


In 2016, Prince Philip ordered a bespoke”gun bus” from Foley Specialist Vehicles, a U.K. builder. This is a modified version of the previous-generation Defender 130 that is designed to haul hunters—who are known in Britain as”guns”—around country estates during shooting parties. According to Foley, this one’s design included LED lighting, a green leather interior, and French Oak trim. It is this vehicle that will be serving as an impromptu hearse at the Duke’s funeral on Saturday, April 17. After all, he reportedly once said to the Queen when discussing his desire for a frill-free ceremony:”Just stick me in the back of a Land Rover and drive me to Windsor.”

The actual ceremony, which was planned with the Duke’s input under the code name”Operation Forth Bridge,” will doubtless be grander than that, involving several of the British military units that Prince Philip was most closely associated with. But the Land Rover’s cameo will be an entirely appropriate one. 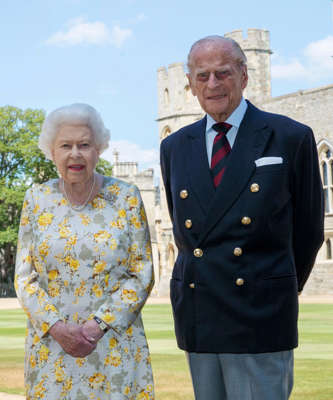 This is How to Wear Matte Liquid Lipstick

Costco's Shortage of This Beloved Frozen Treat Is Over