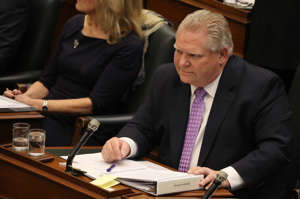 
TORONTO — Ontario is taking its fight against the federal carbon tax to the country’s top court.

Environment Minister Jeff Yurek says the province is asking the Supreme Court of Canada to overturn a decision from Ontario’s Court of Appeal that found the carbon pricing scheme is constitutionally sound.

The Progressive Conservatives say the carbon charge is an illegal tax and a violation of the Constitution because it allows the federal government to intrude on provincial jurisdiction.

Ontario’s top court ruled in a split decision in June that the Greenhouse Gas Pollution Pricing Act, enacted in April, is within Parliament’s jurisdiction to legislate in relation to matters of “national concern.”

The filing to the Supreme Court comes after Ontario Premier Doug Ford said last week that the fate of the province’s carbon tax court challenge would be decided after the federal election.

Ontario, Saskatchewan, Alberta and Manitoba are all in the midst of legal challenges against the carbon price.