BEIJING — The “one child” policy change announced by the Communist Party on Thursday left some economists and investors wondering how the government would address longer-term financial and economic pressures.

The more important contributor to growth over the next several decades, experts said, would be China’s efforts to increase productivity by investing in technology, health care and education.

“What drives China’s future in the next two or three decades, it is not the population,” said Fred Hu, the founder of Primavera Capital Group, a Chinese investment firm. “It is whether future leaders can continue to push ahead political and economic reforms.”

Nicholas R. Lardy, a fellow at the Peterson Institute for International Economics in Washington, said the days when China could rely on its expanding labor force to help fuel economic growth were over.

“The question is whether or not the Chinese are going to implement the kinds of reforms that will lead to a return to the rapid productivity growth we saw in the ’80s, the ’90s and up until the global financial crisis,” he said.

A small rise in the fertility rate might help spur consumption in China in the short term. But Yao Yang, director of the China Center for Economic Research at Peking University in Beijing, said that after two or three years, China would likely return to a lower fertility rate, similar to other East Asian countries like Japan, where each woman has an average of 1.4 children, according to the World Bank.

Mr. Yao said that an aging population threatened to weigh down China’s economic prospects not so much because of a shrinking work force, but because of shrinking consumer demand. He drew comparisons to Japan, saying that its struggle to revive the economy in the 1990s showed that the biggest threat came from stagnating demand as people aged.

“You can always make up for the loss of the labor force,” he said. “You can raise education levels. You can accelerate technological progress, and also you can use robots.”

Three population estimates for 2050. Even with the new two-child policy, the population is expected to decline starting in the 2030s. 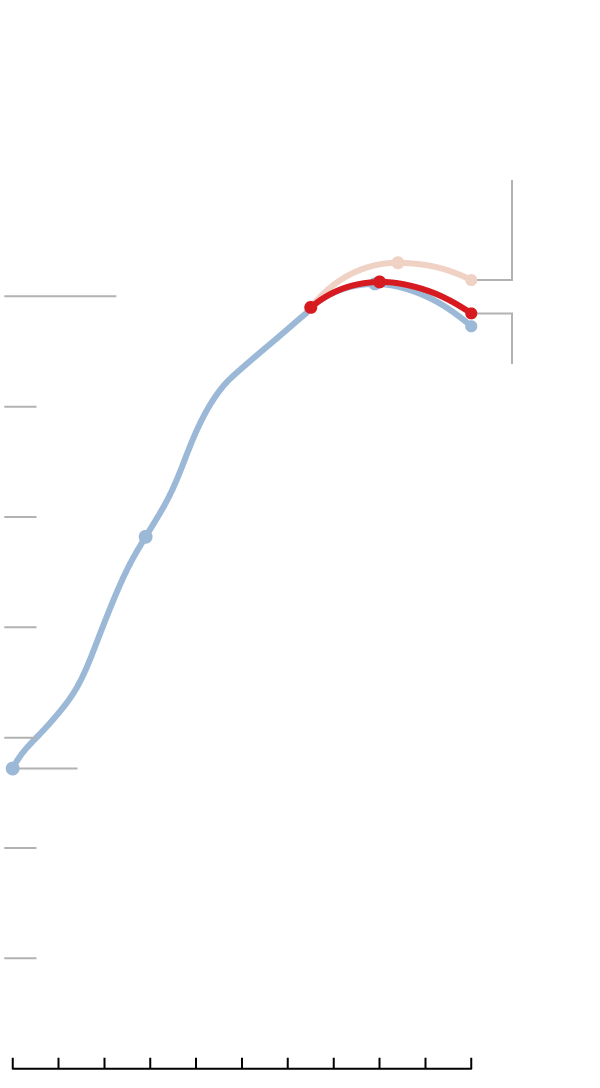 Most women have two children starting in 2016 (unlikely, given the preference for smaller families). Peak in 2034.

Gradual increase to two children per mother. Peak in 2030.

23.4 million less than the middle estimate, about the population of Australia. Peak in 2029. 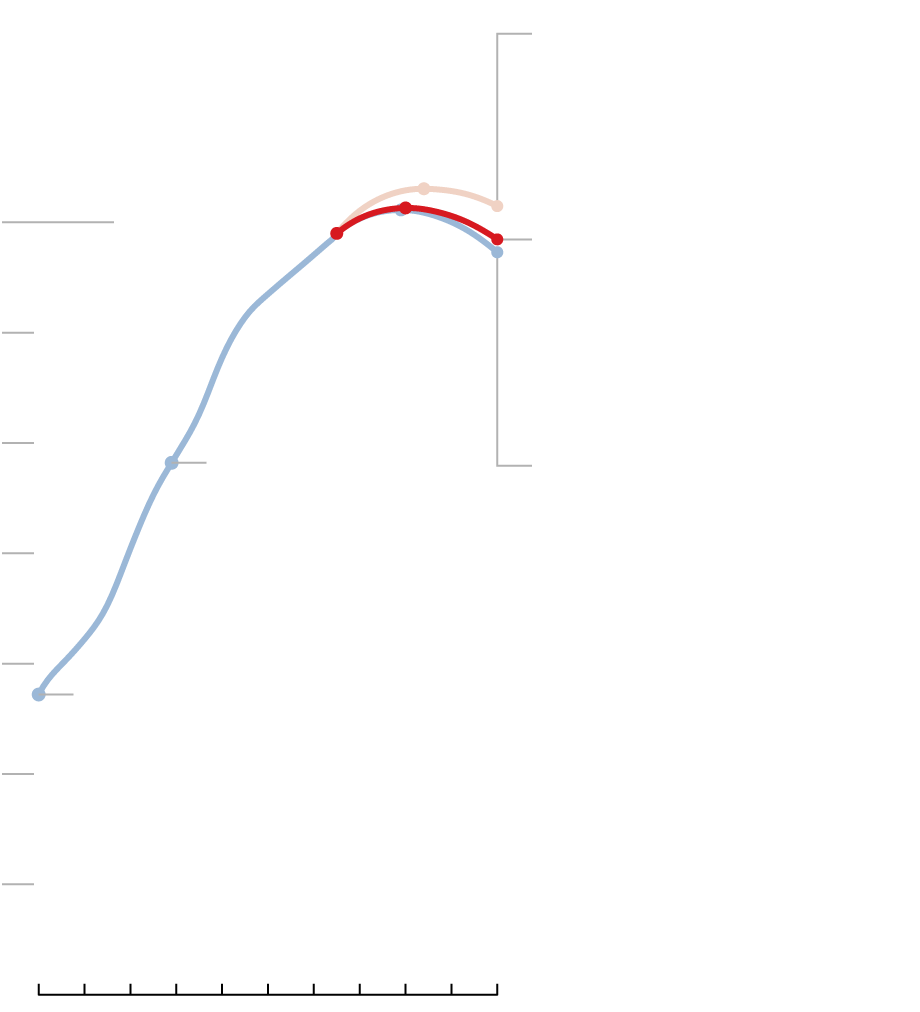 Most women have two children starting in 2016 (unlikely, given the preference for smaller families). Peak in 2034.

Gradual increase to two children per mother. Peak in 2030.

23.4 million less than the middle estimate, about the population of present-day Australia. Peak in 2029.

He added: “The real problem in Japan is the demand side. They’re using a lot of robots, but there’s no demand.”

China’s population has grown increasingly lopsided since the “one child” policy was introduced in 1979. A third of the population is expected to be over age 60 by 2050, up from about a seventh last year, placing significant strains on the government’s budget and its benefits programs for older citizens.

At the same time, the size of the labor force has dwindled in recent years and will probably continue to shrink, economists said, raising questions about how China will sustain a historic economic boom and pay for pensions and health insurance programs. The working-age population dropped for the first time in 2012; last year, it totaled 916 million people, down 3.7 million from 2013, according to the government.

In the long term, an increase in the birthrate would likely offset some of the decline in the working-age population. But in the short term, as children remain out of the labor force and in school, it could place new pressure on the economy, as the overall share of the population dependent on the government rises.

“The economically active share of the population will fall, reversing the demographic dividend that has figured so prominently in China’s rapid economic growth over the past few decades,” David E. Bloom, a professor of economics and demography at the Harvard School of Public Health, wrote in an email. “That’s the medium-term economic danger here.”

Some experts said that even with the new policy, it would be difficult for China to maintain a robust level of growth.

“China is facing a massive demographic headwind,” said Ruchir Sharma, head of emerging markets for Morgan Stanley Investment Management in New York. “I don’t think that changing this policy is going to have any impact. It’s a welcome step, but I think it’s too late.”

Despite those doubts, some Chinese saw an immediate payoff: Shares of companies that make products geared toward babies surged on Thursday. Late into Thursday night, people traded stock tips on messaging applications, with formula makers and car-seat manufacturers at the top of their lists.

How to land startup funding from real estate giant Brookfield, which manages $600 billion in assets