2021 Mini Countryman Oxford Edition is an OK value, but at what cost?

Posted by: Admin in Top Story 8 days ago 0

© Provided by Roadshow
You’ll never confuse this car for anything else, except another Mini, maybe. Andrew Krok/Roadshow


Mini’s Oxford trims are meant to provide great value for new car shoppers without breaking the bank. New for 2021, the Mini Countryman Oxford Edition wraps those efforts in a compact SUV shell, giving buyers extra space without a significant footprint. Trouble is, when you strip away the fripperies that Mini shoehorns into its more expensive variants and start comparing it to the competition, what remains doesn’t exactly feel like a great value.

The 2021 Mini Countryman is a quirky little thing. In a world of ever-sharpening creases and aggressive styling, the Mini’s Hardtop-but-stung-by-a-bee curvature offers a friendlier aesthetic alternative. The headlights are anime-character big and the Union Jack design in the taillights is fun. The Oxford Edition rides on 18-inch wheels (the base model gets 17s), making the whole shebang look a little less entry-level than it is.

Inside, the Countryman’s aesthetics again separate it from the pack, but at the same time, it feels a little meh for a car carrying a $30,000 price tag. None of the softer plastics feel particularly premium, but they do a great job at picking up and holding onto more dust than harder materials generally would. The massive swath of trim across the middle layer of the dashboard looks cool on more expensive variants, but the Oxford’s shiny gray piece looks kind of dull and cheap. It’s better than piano black, though, because this one at least hides fingerprints better. Then there’s the aviation-style switchgear, which will forever remain the most rewarding toggles to flip in the auto industry.

Despite its small form factor, the Countryman is decently functional. The tray ahead of the cup holders is good for stashing a phone or a mask, while an exposed tray under the armrest is sizable enough for a small purse. Visibility is solid, too, thanks to tall glass and styling that doesn’t sacrifice much for an attractive roofline. The Countryman’s shape also means there’s ample interior space for adults across both rows.

The 2021 Mini Countryman is not without its drawbacks, though. The cargo area has a low load floor, which is nice, but its overall capacity of 17.6 cubic feet behind the second row lags behind nearly every feasible competitor, from premium offerings like the Volvo XC40 (20.7 cu. ft.) to mass-market subcompacts like the Kia Soul (24.2) and Hyundai Kona (19.2). The single USB-A port up front smashes your cable against whatever’s in the cup holders. The interior door handles are the opposite of ergonomic, a feature I have disliked from the beginning. Perhaps most galling, though, is the second-row center armrest, which doesn’t exist without a $850 Convenience Package that isn’t even available on the base trim.

BMW’s determination to squeeze every milliliter of blood from the stones that are its customers’ wallets extends to the Mini Countryman’s in-car tech. As a young, strapping new-car buyer, perhaps you’ve heard of these little things called Apple CarPlay and Android Auto. Perhaps you’ve noticed that they’re now standard equipment in a staggering number of new cars across the socioeconomic spectrum. While the Oxford Edition does offer an 8.8-inch touchscreen display that’s larger than the standard 6.5-inch getup, you can’t get it with Apple CarPlay, Android Auto or navigation. It’ll still play music from your app of choice via USB or Bluetooth, but if you’re driving somewhere unfamiliar, you’re stuck trying to stare at a tiny Google Maps screen down in the cup holder. Considering you get CarPlay standard in a Chevrolet Spark , Mini’s decision to lock value-seeking buyers out of a generally vital technological inclusion is, frankly, stupid and pointless; sure, it’s available on other trims, which makes the omission here feel entirely unnecessary. The massive, LED-bedecked circular bezel around the screen makes it hard to press the tiny icons along the touchscreen’s edges, but generally, this iteration of BMW’s iDrive software is fine. 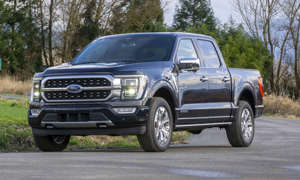 Since the Oxford Edition is meant as a no-haggle, what-you-see-is-what-you-get sort of trim, safety systems are limited to the most notable ones. This Countryman comes standard with forward-collision warning, automatic emergency braking and rear parking sensors. If you want access to adaptive cruise control, a head-up display or self-parking assist, you’ll have to move to a more expensive trim and throw a $1,250 package into the mix. If you’re looking for lane-departure warning, lane-keeping assist or blind-spot monitoring, you’ll have to look at a different car entirely.

© Provided by Roadshow
The Mini’s interior hasn’t changed too much over the years. Andrew Krok/Roadshow


That leaves us with the driving experience. Guess what? That’s underwhelming, too. The Countryman Oxford’s sole engine offering is the base 1.5-liter inline-3 that produces 134 horsepower and 162 pound-feet of torque. It’ll generate enough oomph to dart through urban traffic with ease, but it feels dead below the belt in wider-open suburban and exurban settings. Constantly sounding as if it’s performing under duress, this three-banger does not like the highway, and even something as simple as accelerating from 70 to 80 mph requires planning. The situation is dire even on paper, with my all-wheel-drive tester set to reach 60 mph in a leisurely 9.6 seconds.

The seven-speed dual-clutch transmission is at its best when it doesn’t need to change gears; pushing off from a stoplight feels clunky, deceleration incurs low-speed driveline vibrations and the stop-start system is so annoyingly obvious that I’m willing to pay the extra gas money to keep it off permanently. It’s not very efficient, either, offering just 23 miles per gallon city and 32 mpg highway as it tries to shove around 3,300-plus pounds with four driven wheels. Oh, and it requires premium fuel.

Maybe the ride is OK? Nah, fam. In its own website copy, Mini refers to the Oxford Edition’s fixed suspension as “super-tight,” which is accurate to the benefit of nobody. The Countryman is perennially stiff, transferring all manner of bumps and humps directly to the occupants’ skeletons, and in urban areas where the inline-3 thrives, that means the ride will almost always be uncomfortable. Sure, its handling is flat as a pancake, which could make for some exciting times on curvy roads, but not when an engine this weak has to move this much mass with a transmission that is loath to act with any degree of haste.

© Provided by Roadshow
Mini’s little three-cylinder engine may be fine in purely urban environments, but once the roads open up, it’s hard for this little guy to maintain pace. Andrew Krok/Roadshow


I could forgive a lot of this if the 2021 Countryman Oxford actually presented a solid value, but BMW’s influence bleeds into the price, too. Including $850 in destination charges, my all-wheel-drive tester rings in at $29,350, which I feel is about $4,000 too high given what you can’t get. Yes, there is some value inherent in some of the standard equipment, which includes automatic climate control, heated front seats and the larger touchscreen, but when you line this wannabe-premium offering up against mass-market subcompact competitors like the Hyundai Kona or Mazda CX-30 , it’s hard to recommend the Mini when its rivals offer so much more. Slightly more expensive base-trim variants of the Mercedes-Benz GLA-Class and Volvo XC40 feel far more fully baked, too, even if the window sticker asks a bit more from your paycheck.

That’s the trouble with the 2021 Mini Countryman. Even in its Oxford Edition trim, trying to stand out from the crowd isn’t enough to outweigh an undermotivated powertrain and strange feature packaging with some very notable omissions. If you simply must worm your way into the BMW lifestyle before possessing the financial means to put a Roundel in your garage, the Countryman will serve its mission, but when you take a variety of other factors (and cars) into account, its luster fades quickly.

The #1 Unhealthiest Way to Eat Bananas, According to a Dietitian